The X-ray point source populations of nearby galaxies consist almost entirely of accreting X-ray binary stars and supernova remnants (SNRs). Thanks to the superb spatial resolution and sensitivity of the Chandra X-ray Observatory, we can study these objects in detail in galaxies beyond our own Galactic neighborhood (the Milky Way and its neighbors, called the Local Group). X-ray binaries are classified as either high-mass or low-mass (HMXBs and LMXBs), depending on the mass of the donor star, not the compact object. They are further classified by the type of compact object as either black holes, neutron stars, or white dwarfs.

However, the X-ray data alone are not enough to classify the majority of sources that we see. We must therefore rely on other wavelengths: optical to identify stellar counterparts, radio to identify SNRs, IR as a tracer of dust and of star-formation, UV as a tracer of mass, etc. Combining all these data provides the complete picture of X-ray sources in galaxies and what they can tell us about the star-formation histories of those galaxies.

The binaries that contain both black holes and high-mass stars are interesting for two important reasons: first, they trace the most massive recent star formation in a galaxy; and second, they are excellent laboratories for studying black hole growth and evolution. These sources are the progenitors of the merging black holes that have now been observed as gravitational wave emitters by the LIGO facility. 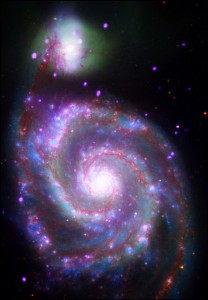 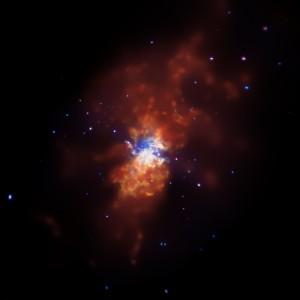 My research interests beyond X-ray populations include:

For students who may be interested in getting involved in research, here are some projects I’m currently working on:

My Papers on ADS